Home > Case Studies > My Baby Had a Hole in the Heart: Case Study 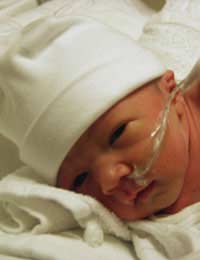 Vanessa has just had her hair done and has just come from having a manicure. “Tonight is our wedding anniversary and it’s the first time we have been out for a whole year, since just before our daughter Carly was born,” she explains.

For 13 months now, Vanessa and her husband Adam have had a stressful time since a doctor at the hospital where Carly was born broke the news to them that she had a hole in her heart.

“Carly was just a couple of days old and we thought everything was perfect but when she was born, she was a bit blue and the medical team had taken the precaution of doing some tests. We never really expected anything to be wrong as Carly was a feisty baby, she was feeding well and she was a good weight at 7 pounds,” remembers Vanessa.

Hole in the Heart Diagnosis

The doctors explained that Carly had a large atrial septal defect. This is a hole in the wall between the two atria of her heart, a hole that normally closes up at birth. “I had never thought about the moment a baby is born and how they switch in seconds from absorbing their oxygen through their placenta to breathing. The way the blood vessels are connected to the heart changes very quickly and the miracle is that the vast majority of babies have normal hearts,” says Vanessa.

In Carly’s case, something had gone wrong with this usually efficient natural process. Babies can also be born with a hole in the wall between their ventricles, the bottom chambers of the heart, a condition known as a ventricular septal defect. Holes in both sites can vary in size; some are no more than a pin hole and are rarely detected unless a problem occurs later in life. Others are larger, but many do close up naturally in the first few years of life.

Although Vanessa and Adam were reassured that Carly’s atrial septal defect was only a moderately sized hole, they were desperately worried and found it difficult to relax and enjoy being parents once they got Carly home. “We had planned on having the cot in our room at first but after a couple of months, neither of us dared suggest that we move it to the nursery bedroom that we had finished decorating for Carly.

Carly’s immunisations were another worry, but the health visitors and doctors reassured the couple that there was no reason why a baby with a hole in the heart could not have them. They also stressed that Carly was not considered a sick baby and she seemed very healthy, although she was gaining weight at a rate that was well below average.

Check up at Six Months

When Carly was six months old, she was referred to a specialist cardiac unit to have some ultrasound checks to see if the hole between the atria of her heart had changed in size. “We had noticed that Carly had started to grow and put on weight a bit faster so we were hopeful that it had gone away – but, it had actually increased in size,” recalls Vanessa.

Still nothing needed to be done, and there were no obvious signs that Carly was having difficulty moving around or breathing. “In fact, she was the first baby in the group of friends that I met up with regularly to turn over and then the first to sit up,” says Vanessa. Still, the couple could not stop worrying and Carly continued to sleep in her cot in their room and Vanessa started to lose weight herself with the constant broken nights. “It wasn’t that Carly woke us up more than once for some milk – I was just panic stricken every time she slept quietly!” says Vanessa.

When Carly was coming up to one year old, her medical team realised that her hole in the heart was taking more toll than it should on her parents, particularly on Vanessa and one of the health visitors arranged for the couple, and Carly, to meet a support group of parents and children who had faced the same problem. “That helped so much – there were children there of all ages from 1 to 9 and they all looked so well. It was great to be able to talk to other people who had experienced the same thing and after that, Carly had her one year check up and the tests showed her hole in the heart has started to close.

“So, for the first time, Adam’s mum is babysitting tonight and we are having our first night out together... and I think I’m going to enjoy it without worrying for once,” she smiles.

I Had to Have a Pacemaker Fitted: A Case Study
Share Your Story, Join the Discussion or Seek Advice..
I've had an interest in cardiac issues for quite some time now and I am considering being a cardiologist. The heart is one organ that baffles me the way it works;quite interesting.
T-gurl - 26-Jan-13 @ 1:05 PM
Title:
(never shown)
Firstname:
(never shown)
Surname:
(never shown)
Email:
(never shown)
Nickname:
(shown)
Comment:
Validate: