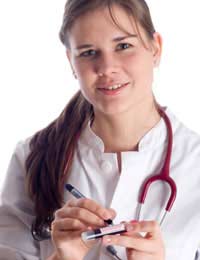 Enzymes are found throughout the body and are released to enable chemical reactions and responses to take place.Cardiac enzymes are chemical substances made up of proteins that are essential to enable function of the heart muscle.

These enzymes are always present in the blood, even in those with good health, but they are released to higher concentrations when the heart tissues become damaged or have to work harder.

What Are The Main Cardiac Enzymes In The Body?

The main cardiac enzymes found in the heart tissues are troponin T, troponin I, creatine kinase (CK), aspartate aminotranferase (AST) and lactate dehydrogenase (LDH).These enzymes all rise and peak at differing times after heart muscle injury and the elevations can remain peaked for several days, though these times are also variable with the different enzymes.

These enzymes are extremely important and testing for them can tell doctors whether or not the cardiac muscle has been damaged in some way, for example when a heart attack has taken place.

When the cells of the heart become damaged, the membranes within the cell become weakened causing the enzymes contained in the cell to seep out into the blood stream.The more damaged sustained by the heart, the greater the concentrations of the enzymes in most cases.

Testing for cardiac enzymes is a routine part of diagnosing damage to the heart, particularly when a heart attack is suspected. The test is not carried out alone and a full examination of the patient will be needed along with other tests such as an electrocardiogram (ECG). This is because raised levels of cardiac enzymes does not automatically mean that a person had suffered a heart attack as raised levels are also present in many other conditions of the heart also.

The testing is performed by obtaining a blood sample and finding out if there are high concentration levels of the enzymes in the blood. As these concentration levels can rise slowly as more leak into the blood stream. It is often common practice to repeat the test after some time has lapsed and levels reassessed.

The results from the tests are usually available quite quickly (often within an hour or two) due to their use in emergency patients and the need for physicians to make a fast and accurate diagnosis.

Separate tests are usually carried out also to test for levels of the different types of cardiac enzymes and some are more reliable than others.Testing for troponin T and I are becoming the most popular testing techniques as the results are more accurate and specific to heart injury and the levels remain raised for longer periods of time, though most doctors will also routinely test for the other enzymes as well.

Cardiac enzymes are chemicals that are found naturally in the blood. Their levels become raised as a result of injury to the heart muscle and a simple blood test can be performed to help make a diagnosis. The test is commonly performed if a heart attack is suspected and has become a routine part of making such a diagnosis.