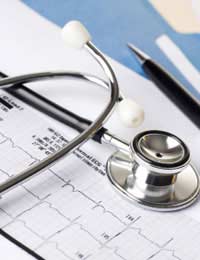 Having severe chest pains is usually a reason to call an ambulance straight away as the person involved may be having a heart attack. Medically, a heart attack is called a myocardial infarction – meaning there is a part of the heart muscle that has died. The underlying cause is a blockage of the coronary artery which can be due to a fatty plaque called an atheroma. Sometimes this becomes so big it stops blood passing through the artery – or it can narrow the artery so that blood flow becomes so slow the blood clots, again blocking the vessel. Pain can also result from a partially blocked coronary artery.

Finding out what has happened to the heart is not easy – you can’t check out what the heart looks like and, because it is a soft tissue, you cannot see a clot on an X-ray. Instead, a complex series of tests needs to be done. Recently, the terms used to describe a heart attack have been reviewed and the term acute coronary syndrome is now used. This covers a heart attack, and also a condition known as unstable angina. It also allows two different forms of heart attack to be recognised.

Angina can be a chronic condition – stable angina is chest pain that happens when you do some exercise, such as climbing a flight of stairs but goes away again when you rest. Pain is predictable and associated with strenuous activity. It doesn’t tend to come on when you are resting or sleeping. Unstable angina happens unpredictably, causing sudden chest pain that can be mistaken for a heart attack. None of the heart tissue suffers an infarction, however, but someone with unstable angina can be at very great risk of having a heart attack.

Unstable angina can be diagnosed using an electrocardiogram (ECG); the pattern obtained, called the trace, can tell the difference between a heart attack and an attack of angina.

ECG Traces - What They Show

When an ECG is done, a trace of spikes is produced that shows the electrical activity of the heart during a heartbeat. Unstable angina and heart attacks are diagnosed by comparing the trace of someone who is having chest pains, with a normal heart trace. A key section of the trace, called the ST segment, looks different. Normally there is a little blip at the ST segment; in unstable angina, that blip can be normal or it can be lower than usual, but it is not higher than usual.

After a heart attack, particularly a severe one, the ST segment of an ECG trace can be much bigger than usual, showing that there is a significant blockage on at least one of the coronary arteries. This has caused death of some of the heart muscle and this has disrupted the normal electrical conduction that controls heart beat.

Two forms of heart attack are included in a diagnosis of acute coronary syndrome. The milder form is due to a blockage in a smaller artery, or an incomplete blockage in one of the larger coronary arteries. The ST segment of the ECG trace shows a depression rather than a small spike, and blood tests show that there are molecules that have been released from dying heart tissue. This type of heart attack is called a non-ST segment myocardial infarction – or NSTEMI for short.

STEMI, NSTEMI and unstable angina are all acute; they require immediate emergency medical attention as the danger of death is very real. Someone who collapses with chest pains should be rushed to the nearest accident and emergency department for assessment and prompt treatment to prevent further damage to the heart.

How Anorexia Affects the Heart