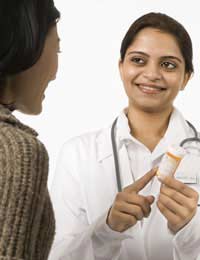 Nitrates are a group of medications given to patients who suffer from angina. They can be either short or long acting and will need prescribing by a doctor.

Nitrates are given to those patients who have angina due to narrowed blood vessels most often caused by a build-up of fatty plaques known as atheromas, and work by helping the blood vessels in the body relax, allowing for blood, oxygen and nutrients to flow more smoothly and reach their target areas.

These drugs are given most often to those who experience frequent attacks of angina causing chest pain.They aim to ward off attacks and must be taken regularly as prescribed to be most effective.

They are not as useful for immediate pain relief as they take longer to work but, as they slowly release a constant amount of the drug into the body, they are better at preventing angina attacks from occurring.

Nitrates in the long acting range include glyceryl trinitrate, the most commonly prescribed form of nitrate, isosorbide dinitrate and isosorbide mononitrate. These drugs most frequently come in tablet form as tablets can release the drug slowly, or as a topical skin ointment or skin patch.

If a long acting nitrate is prescribed, there is a chance that you may become tolerant to it and it will stop being as effective. Due to this, the preparations and patterns of dosage are designed to allow absorption to take place over less than 24 hours leaving the body a few hours free from its effects allowing the tolerance level to drop.

As the mechanism of this group of drugs causes the blood vessels to dilate, the patient may experience a temporary flushing of the skin as the blood is permitted through the vessels. This is more common in those taking short acting nitrates and will gradually subside in those who experience it whilst taking long acting nitrates. Along with this flushing, a headache can develop along with dizziness, again these are not serious and will subside.

The use of nitrates is contraindicated in the presence of certain medical illnesses all of which should be discussed thoroughly with your doctor. They can also interfere with some medications and should not be taken with any Viagra preparations or similar drugs.Overall nitrates are safe medications with no long term or potentially serious side-effects.

Long acting nitrates are commonly given for the treatment of frequent angina and work by dilating the blood vessels allowing blood and oxygen to flow properly through the circulatory system.

They are generally very safe and very effective at preventing angina pain and can be used long term without any damaging effects.