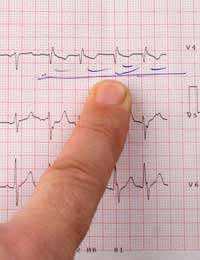 Congenital heart disease or CHD, is a name used to describe those heart disorders that have been present since birth. Usually relating to structural defects that have occurred whilst the developing foetus is growing in the uterus, CHD can prevent the normal function of the heart and can range from a slight defect to one that severely compromises the pumping ability of the heart and the flow of blood around the body.

As the heart is a complex arrangement and encompasses many different structures, functions and tissues, there are a number of possible types of congenital heart disease with the most common ones being: patent ductus arteriosus, hypoplastic left heart syndrome, obstruction, cyanotic defects, septal defects, and Ebsteins anomaly.

Patent Ductus Arteriosus refers to a condition where a false route of blood flow occurs in the foetal form allowing blood to bypass the lungs. If this channel does not close on its own, blood that should be sent around the body via the aorta is channelled back to the lungs instead and results in the child becoming easily short of breath, developing frequent chest infections, tiring easily and having a slow growth rate. It is seen more often in premature babies rather than full term, and a very narrow channel may go undetected for some time as symptoms may not occur.

Hypoplastic left heart syndrome is a potentially fatal defect of the heart occurring when the left side of the heart, including the aorta, is not developed properly. Seemingly normal to begin, the affected baby will show signs of breathing difficulty and discolouration within a few days. It must be treated as soon as it is diagnosed in order for the child to survive.

To suffer from an obstruction, is when any of the major veins, arteries or valves to, from and within the heart become blocked or narrowed in some way; this is called stenosis. Some children may display no symptoms but others may suffer from dizziness, lack of oxygen and breathlessness, depending on how bad the stenosis is. Treatment is determined on the severity and can range from simple medications to very serious operations such as transplant, widening of the blood vessel or valve replacement.

The term ‘cyanotic defects’ is an umbrella description given when there are problems with the circulation of blood within the heart and oxygen rich blood mixes with venous (deoxygenated) blood resulting in an inadequate circulation of oxygenated blood around the body. There are numerous types and causes of cyanotic defects though some may arise with no known or obvious cause.

The wall between the two upper chambers of the heart, the atria, and the two lower chambers, the ventricles, is called the septum. It this wall is damaged in some way, the person is said to suffer from a septal defect. This form of CHD is usually a hole in the septum, leading to inadequate blood flow around the body as the blood collects in the heart, frequently leading to an enlargement of the organ.

Ebsteins anomaly is diagnosed when there is a defect of the tricuspid valve, which separates the right atrium and right ventricle allowing blood to flow back into the atrium instead of flowing out of the ventricle. It can present with no symptoms and not cause any major problems, or may require surgery to amend the defect depending on the severity of any presenting symptoms.

For many people, the cause of a structural defect may remain unknown, but for others, the causes may be due to a genetic factor that predisposes future generations to developing a hereditary condition. It is possible that the lifestyle choices of the parents of the affected person have influenced developmental abnormalities, along with the presence of either bacterial or viral infections present during pregnancy.Some existing medical conditions in the mother, such as liver disorders or diabetes can also contribute to the development of CHD .

Treatment options surrounding congenital heart disease are very widely variable and can range from no immediate interventions to the use of medications, surgery or both. Surgery may be relatively minor with few risks, or can include major transplant surgery.

Congenital heart disease can refer to problems with the heart itself, the surrounding tissues or the blood vessels flowing in and out of the organ. These problems are often diagnosed at birth as they have occurred whilst the foetus developed in the womb.