What is Atrial Myxoma? 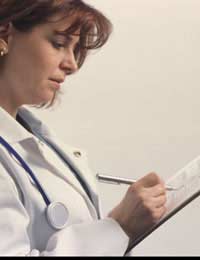 The basic anatomy of the heart consists of two upper chambers called the atria and two lower chambers called the ventricles. The two upper chambers are divided by a wall of tissue called the septum. An atrial myxoma is the most common of the types of tumours found in cardiac tissue. These tumours are found in either the left or right atrium, on either side of the septum. Most often there is only one tumour present but it is possible to have multiple growths.Although rare, the tumours are most often seen in middle aged females.

What Causes an Atrial Myxoma?

As these tumours are rare it is difficult to ascertain exactly what causes them, but doctors believe that there may be a familiar link and that some instances can be blamed on hereditary factors.Atrial myxomas are known as primary heart tumours, meaning that they began their development within the heart tissues, not in other parts of the anatomy that then encroach on cardiac muscle as in other cases.It is far more common to find an atrial myxoma in the left atria than it is the right.

Symptoms of an Atrial Myxoma

Early symptoms of these tumours are quite rare and tumour growth is often quite well established when symptoms are first experienced. These symptoms include shortness of breath, especially when lying down, light-headedness, feeling chest pains or palpitations. Often these symptoms are experienced when a change in body position has occurred.Other signs of atrial myoma can include white extremities or blue tinges to the fingers or toes, loss of weight, swelling of the arms, legs and digits and a feeling of being generally unwell. These symptoms can represent many different illnesses so an exact diagnosis is required before surgery is offered, which can be difficult not only because these tumours are rare, but because they carry the same warning signs as many other cardiac disorders which can sometimes lead to an inaccurate initial diagnosis.

The only treatment available for atrial myxomas at the present time is by surgical removal. It is essential that all the cells of the tumour are removed or there is a chance that the tumour may grow back.It is also common for the patient to require a mitral valve replacement upon removal of the tumour and this can usually be performed during the same operation.Although atrial myxomas are a non-cancerous type of tumour, it is important that they are totally removed as they may return, not just in the same location, but in other parts of the anatomy if cells become fragmented and travel to other parts of the body.

Atrial myxomas are a potentially very serious threat to health. This is not due to the threat of cancer, but because then tumour can grow so large it may obstruct the muscular function of the heart, but also because the cells of the tumour can be released and threaten other parts of the body.As with any surgery there are risks, but the prognosis without treatment is far more hazardous than undergoing the procedure for most, depending on the whether the patient has other health problems.

How Anorexia Affects the Heart
Share Your Story, Join the Discussion or Seek Advice..
In March of 2012 I was diagnosed with an atrial Myxoma. I had been complaining about being dizzy for several years and in late December and early January almost passed out at the dinner table. Also, I had been having ocular migraines for the past few years too plus complaining to my wife and doctor that "I just didn't feel good". I also had a weird numb feeling in both arms, and just prior to going to the doctor in March I had a headache that lasted for 3 to 4 weeks that would not go away. The tumor was removed a few days after it was found, and recovery went very well except for a couple of rounds of pericarditis and a few minor things like legs swelling, etc.. By week 4 I was able to walk 1 mileandover the following 3 months I was able walk 3 miles. To this day I still get tired easily but the feeling of not being well is gone and the ocular migraines are gone too as is the numb feeling in my arms. In my opinion the best medicine for recovery is walking. In hindsight I feel that walking did me the most good, and I will be walking 3 miles per day for the rest of my life. Oh, and before they found the tumor I was jogging about 2.5 miles per day...I don't jog anymore :-) One of the weird side effects of the surgery was my tinnitus went away (yay) after the surgery...but about 60 days after the surgery it came back (boo). Articles on this site and others have been a great help in understanding the process of getting well, what was done to me,and how to recover. Thank you.
Marc - 26-Sep-12 @ 3:21 PM
I am 61 and was diagnosed with atrial Myxoma had open heart surgery, June 2012. I am exercising according to booklets given to me at the time of my release from hospital .i am trying to walk 1to2 miles a day at various gradients some steep ,I find it hard to walk fast enough to make me gently out breath , because of leg muscle and sternum pains. I had my Stattins dose reduced .Am i trying to do to much to soon ?would be grateful for any comments to help me other than , YOU HAVE HAD MAJOR SURGERY AND IT TAKES TIME .
lucky one - 31-Jul-12 @ 11:17 PM
I was 43 (last year) when I had a stroke and was diagnosed with atrial myxoma. Only after my open heart surgery thatI read about it and was amazed to finally know the reason why my toe became blue black, and the rest of the symptoms such as "blue tinges to the fingers or toes, loss of weight, swelling of the arms, legs and digits and a feeling of being generally unwell" What an experience it has been....thank you for these articles. I would like to know about post AM and what happens next...jue
JL - 24-Feb-12 @ 6:04 PM
Title:
(never shown)
Firstname:
(never shown)
Surname:
(never shown)
Email:
(never shown)
Nickname:
(shown)
Comment:
Validate: