What Are Heart Murmurs? 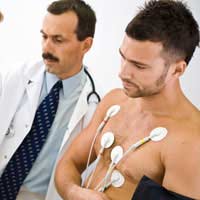 Heart murmurs can be a very common occurrence in children and can be diagnosed from birth. It is often first suspected after listening to the child’s chest using a stethoscope and as well as the familiar rhythmic beating of the heart, an additional ‘whoosh’ can be heard.

There are two different types of murmurs, those classed as ‘innocent’ and those that are a sign of disease.

Innocent murmurs are the most common and may carry no symptoms. Doctors are not often very concerned with these occurrences and believe them to not be harmful to the child. This type of murmur is also common in pregnant women as they produce more blood to supply the womb and baby during gestation.

Murmurs that carry symptoms can indicate types of illnesses and congenital heart defects and further tests and interventions will be necessary.

Causes of a Heart Murmur

Heart murmurs that are considered to be a sign of disease are usually due to problems with the valves of the heart or the septum, which divides the chambers. The valves may be narrowed or leak blood, most commonly caused by developmental disorders of the developing foetus in the womb, or the septum may not be fully developed and contain a ‘hole’ through which blood can leak.The timing, size and location of the murmurs will need investigating to ensure the correct diagnosis and treatment options are made available.

For those in adulthood, the murmur may be due to infection of the valves, calcification and thickening of the valves or indeed due to untreated rheumatic fever.

As many children with murmurs experience no other symptoms, other than it being detected using a stethoscope, no intervention will be needed and these are classed as innocent murmurs, and the child will be simply monitored for signs of any changes.

Those with other symptoms may suffer from blue tinges to the lips (cyanosis), breathlessness, a lack of interest in feeding and failure to thrive. Adults with heart murmurs have reported feeling faint, chest pain, increased perspiration and sweating and tiredness and lethargy.

Those with innocent murmurs will need no treatment as the condition causes no problems and will normally resolve themselves.For those with inflammation and infections of the heart valves, treatment will be given for these conditions following which the murmurs should recede.

Murmurs caused by congenital heart defects will require a higher level of investigation and treatment and options depend on the size, type and cause of murmur. Surgery may be an option for many as defects of the valves and septum will need either repairing or replacing depending on the severity of the damage.

Occasionally medications may be sufficient, especially in the early years whilst the youngster builds strength. The child will be monitored regularly for signs of either improvements or deterioration of the condition.

If at any time you are concerned about your child and feel they are suffering from a lack of oxygen or are having chest pain, seek medical advice immediately.

Heart murmurs are commonly seen in children and are often no cause for alarm as they may be harmless. For others, they can indicate a sign of more serious congenital disorders that may require medical intervention.

How Anorexia Affects the Heart
Share Your Story, Join the Discussion or Seek Advice..
I am 62 years old, and have just been told I have a heart murmur, I suffer with high anxiety for the last 4 years due to having an episode of a very rapid heartbeat, the hospital thought at first that I had suffered a mild heart attack but later said that I had not.This weekI went to see doctor, as I was having pains in legs and arms above the elbows also in my back, I had to see a locum doctor as my own doctor is on maternity leave, I did ask what does that mean for me, but she said it was just an age thing.Sorry but anxiety is running quite high now, because a more detailed explanation would have not left me worrying so much, Also is there anything I can do to help this condition myself.She did not explain why I was so achy.I live in Ireland and have to pay E50 per doctor visit, so cant afford to keep going back for more visits with no results.
issy - 9-Dec-12 @ 2:18 PM
I have a friend female 62 who has been diagnoed with 2 heart murmurs.Her father died with a heart attack when she was 7.She also has thyroid prblems and she is taking medication for that ,i tnink it's clalled thyroxaid.Is this condition serious.Thankyou
n/a - 11-Sep-11 @ 12:53 PM
Have been on 1200mg lithium carbonate nocte for 10yrs+ for bipolar, and have recently been diagnosed with encrustation on aurora platelet. Could high dose of lithium been a contributory factor?
ssephitoth - 17-Mar-11 @ 7:20 PM
Title:
(never shown)
Firstname:
(never shown)
Surname:
(never shown)
Email:
(never shown)
Nickname:
(shown)
Comment:
Validate: